While I love phylogenetics, I rarely venture into the land of morphology-based phylogenetic trees.

Molecular sequences make sense to me as data. In a protein sequence, a proline is a proline, and if two proteins can acquire a proline in the same place by convergent evolution, well, you can look at large-scale patterns of amino acid substitution and estimate the chance of that. Genomes contain exactly 4 kinds of bases, they encode exactly 20 kinds of amino acids, and that’s that at least as far as conventional molecular phylogenies are concerned. Sequences are exactly the sort of neat, discrete data that you can describe and explore and simulate the heck out of to make sure that the assumptions you are making when you use them to infer relationships between genes or organisms are realistic.

Truth be told, morphology as a way of figuring out relationships kind of scares me.

However, I do love phylogenies. I’m also interested in the relationships of extinct creatures (where, unless they are very recently extinct, you simply don’t have molecular data to play with). Plus limitations intrigue me, not to mention that the limitations of the methods we use to arrive at conclusions have a huge practical importance. (As in: they can lead to bullshit conclusions.) Hence I thought a paper titled “When can clades be potentially resolved with morphology?” would be an interesting read.

And it absolutely was, only in a totally different way than I expected. I thought it would be all about the limitations I was thinking of – convergent evolution, defining and interpreting traits, the statistical biases of treebuilding methods, that sort of stuff. Instead, it ignored those issues completely in favour of a much more fundamental limitation. Bapst (2013) doesn’t talk about information that you or your fancy algorithms misinterpret. He talks about information that, due to the very nature of evolution, just isn’t there.

A modern classification of organisms is built out of clades: groups including all descendants of a single common ancestor. Phylogenetic trees are clades within clades within clades – or branches splitting into smaller branches splitting into twigs. A fully resolved tree consists only of two-pronged branching points. That is, if you pick any three creatures, you can tell which two of them are closer to each other than the third. (Resolution is determined by statistical support from methods such as bootstrapping. Bootstrapping basically asks whether all your data agree on the same tree.)

Clades are recognised by what their members share with one another but no one else: for example, a subgroup of dinosaurs that includes birds has feathers, which they inherited from their common ancestor. Each clade can have many such shared derived traits or synapomorphies. However, sometimes there are no synapomorphies. Take, for instance, the case of a single ancestral species “budding off” a series of descendants without changing much itself, like so: 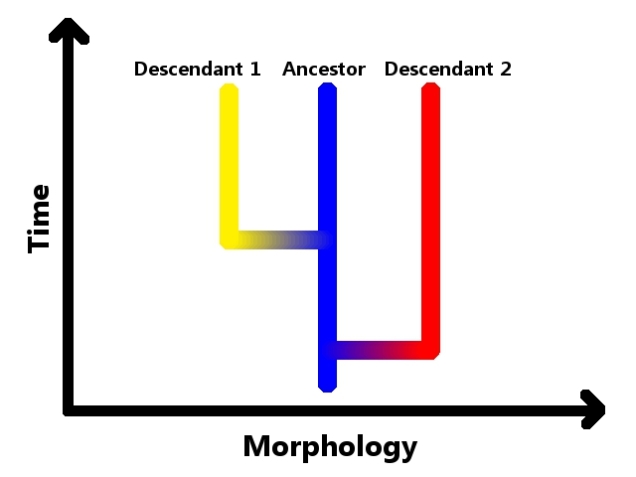 (You could say that three-spine sticklebacks are doing exactly this – the ancestral form that lives in the sea is largely similar all over the northern hemisphere, but it keeps getting stuck in rivers and lakes and sprouting a huge variety of descendants.)

In such a scenario, Descendant 1 is kind of closer to Ancestor than Descendant 2 is, since there’s been less time since they split. However, because Ancestor didn’t change in all that time, there are no synapomorphies that unite it with D1 to the exclusion of D2. A morphology-based phylogenetic tree of these three species would be intrinsically unresolvable – no matter how much data you collect and how well you analyse them, you’re not going to get the true tree, only a sad little bush. (A molecular phylogeny may be able to resolve a history like this, since genomes aren’t going to stop evolving just because the creatures that have them look the same.)

This is the sort of limitation Bapst explores through his simulations. The simulations don’t actually model the evolution of morphology itself. They compress all morphological change into “differentiation events”, i.e. the point at which two taxa become distinguishable. (He later makes the important point that “taxa” could be anything on the traditional Linnaean scale – species, families, classes, whatever -, and his conclusions would remain the same.)*

Differentiation events then might happen in a variety of ways, illustrated by Bapst’s Figure 2 below:

The simulations investigate how many intrinsically unresolvable clades we should expect under various mixtures of the four scenarios above, combined with more or less complete sampling of the fossil record. Some of the observations I found fascinating:

It’s worth noting that it’s actually close to impossible to tell whether the lack of resolution in any given real dataset is due to this intrinsic effect or some other issue. However, the take home message of this study is that however well you’ve eliminated other sources of ambiguity, you should pretty much never expect a fully resolved phylogeny if you are working with the morphology of real creatures. If you got one, you probably did something wrong!

(Considering that molecular data can be just as incapable of correctly resolving relationships under certain circumstances, I dearly hope that the problem groups are at least going to be different for the two kinds of data… :D)

*This is a distinctly punk eek-flavoured model, BTW; if morphological change is evenly spread out through time, the whole thing falls apart. But, then, if change is evenly spread through time, you wouldn’t have scenarios with unchanged ancestors like the one above, and I gather that the existence of those is an established palaeontological reality.

**However, this doesn’t mean that trees obtained from patchy fossil records will be more accurate – having a poorer sample also means potentially overlooking misleading changes like reversals to an ancestral state.

Bapst DW (2013) When can clades be potentially resolved with morphology? PLoS ONE 8:e62312

Holy ribosome, I’ve just written close to two thousand words about a paper. I… think I may have got a bit too excited. Or too bogged down in little technical details. Either way, you got lucky. The two-thousand word monster is not what you’re getting.

The reason I got excited about Piasecka et al. (2013) is that it, er, qualifies some other things I’d previously got excited about. And by “qualifies”, I mean turns inside out and performs a thorough autopsy on.

I previously touched upon the idea of the developmental hourglass – meaning that the embryos of related creatures are most similar to each other somewhere in the middle of development. The great rival of this hypothesis is that of early conservation (or the “funnel”), where embryos diverge from a similar starting point. The latter has been around as long as comparative embryology itself. The hourglass is a pretty intriguing pattern and raises all kinds of questions about what causes it – but of course, to have a cause, it has to exist in the first place.

So my previous excitement had been partly about the observation that the hourglass – originally noted in visible traits of embryos – also exists in the changing sets of genes activated throughout development (the transcriptome). According to various papers, genes expressed in mid-embryogenesis are on average older, slower-evolving and behave more similarly across species than genes active at other stages. If such observations are correct, that would certainly indicate that the hourglass is a real thing and something strange is going on with constraints and evolvability.

But, and here comes the Piasecka paper – is it?

This study is huge. There is (to use a highly technical phrase) a fucking shitload of stuff in it. Instead of looking at some big global property of the transcriptome, these authors went into all kinds of detail about various properties of specific sets of genes. They looked at – well, they say they looked at five different measures of evolutionary constraint, but actually some of those are made up of more than one thing, so really it’s quite a bit more than five.

And when they go down to that level of detail, they find that the hourglass is not a universal property of the developmental genetics of zebrafish embryos (unlike Domazet-Lošo and Tautz [2010] reported). Different measures of evolutionary constraint such as the strength of selection against protein-changing mutations, the age of the genes (which is what the original study focused on), or the conservation of their regulatory elements, show different patterns. There are hourglasses, there are a couple of funnels, and then there are parameters that just don’t exhibit much systematic change at all.

(There’s also a couple of points about potentially dodgy statistical approaches in some of these papers, which may make all the difference between an hourglass and a funnel. That’s a bit scary.)

I can’t say I’ve properly digested this paper. There’s an awful lot in it, and, my head was spinning non-stop when I finished reading. It’s definitely fascinating stuff, though, and once again, the conclusion is that things are More Complicated. (I’m kind of getting used to that at this point…) Before, you could look at a group of creatures, compare their development and ask, funnel or hourglass? Then you could ask why. Now, you can’t just make grand generalisations about anything. Taking Piasecka et al. at face value, “funnel or hourglass” is not even a valid question – it depends on exactly what you’re measuring. So much for “laws” of developmental evolution…

Piasecka B et al. (2013) The hourglass and the early conservation models—co-existing patterns of developmental constraints in vertebrates. PLoS Genetics 9: e1003476